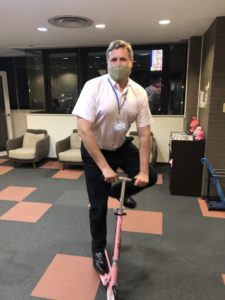 On the grassy banks of the Iowa River, in a University town called Iowa City, is where I was born. Iowa is famous for its delicious sweet corn, its pork tenderloin cutlets (similar to tonkatsu but we eat it in a hamburger bun served with pickles and onion) and of course the college football team “The Iowa Hawkeyes”.

My life changed forever when I went to the University of California, and that adventure eventually led me to Japan. You see, it was in my college days at UCSC that I started studying Aikido, also known as “The Art of Peace”. In 2001 I came to study at the Aikido Honbu dojo in Shinjuku and lived in Koenji for 3 months. However it was winter and a little cold. Furthermore the internet was new, communication was very difficult at that time and very few people spoke English.

Upon graduating I returned home to Iowa where i worked in restaurants and schools for a number of years. I had the lucky chance to return to Japan in the summer of 2014. On that trip I studied aikido at the honbu dojo in Shinjuku again but I also saw the countryside. I traveled from Kanazawa to Hida-Takayama, to Shingu and Hongu and Nachi Falls, climbed up and down Mr Fuji and partied in Ueno and Asakusa, went to see the Swallows play the Carp at Jingu Stadium…. In 2014, most of the people I met in Tokyo spoke a little English. I knew, by the end of the month, that I wanted to spend another year here.

I returned to Iowa and enrolled at e University of Iowa studying Japanese that fall. At the end of the year I applied as an exchange student at Meiji University. Meiji was a great place to learn more deeply about Japanese culture. By the time I graduated I had met my wife. Now we live in Shinjuku, and I’m still just a 10 walk from the Aikido Honbu dojo.

I’m also pleased that I was just accepted to Waseda University as a graduate student. Japan has been very good to me. Despite the difficulties of the last year, I’m so happy to be living in Tokyo and doing what I love. I hope I can help you with your language goals because I truly believe that whether you are learning a new language for the first time, or just want to polish up your skills, it can change your life. It certainly changed mine.