How much do you know about Easter? Here are a couple of things about the holiday that you might find interesting.
Easter is a Christian holiday commemorating the resurrection of Jesus from the dead, which occured on the third day after his burial following his crucifixion-an ancient form of execution in which a person was nailed or bound to a cross.
It is preceded by Lent, a 40-day period of fasting, prayer, and penance-the turning away from sin and turning to faith in God. Many people choose to give up something, give to charity or volunteer during the 40 days.
So, why do people color eggs for this holiday?
The egg is an ancient symbol of new life and rebirth. In Christianity it became associated with Jesus’s crucifixion and resurrection.
The custom of the Easter egg originated in the early Christian community when people stained eggs red in memory of the blood of Christ that was shed at his crucifixion. And it is said that for some Christians, the Easter egg is a symbol of the empty tomb.
According to Wikipedia, the oldest tradition was to use dyed chicken eggs. The modern custom is to use dyed eggs too, but also decorated chocolate eggs, or plastic eggs filled with candy such as jellybeans. People enjoy these candies and sweets at Easter after having abstained from them during the preceding forty days of Lent.
And, Did you know that Easter is an annual holiday but the date changes every year. It does always fall on a Sunday, though. Basically, Easter Sunday is the first Sunday following the first full moon after the first day of spring.
This year the vernal equinox was on March 20th, the first full moon after that date March 28th making the following Sunday, April 4, Easter 2021. 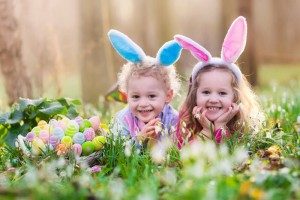