My personal experiences of skateboarding are not so exciting.
It is common to have small skatepark areas at local parks in the UK and often children play on them.
However, in my area at least, it was very rarely serious skateboarders using the skateparks, usually just kids messing around on the ramps.
A couple of my friends were more interested in skateboarding than me so I joined them in visiting a local indoor skatepark.
That place was full of serious skaters. Unfortunately, I couldn’t do any more than an `olly` – the simplest trick of all, a simple jump.
Since skateboarding is such a difficult sport though, amongst my friends most people were not much better than me.
Some schoolkids managed to do a `kickflip` once or twice but they never improved beyond that.
Skateboarding is really hard!
Skateboarding was further popularised in Western countries by the popular video game “Tony Hawk’s Pro Skater” and various other “Tony Hawk” games that came after.
Because of that game, skateboarding became popular with people that had never tried real-life skateboarding.
Now, it is common that ordinary people of my generation, that may be terrible at skating, know a lot about trick names and such. 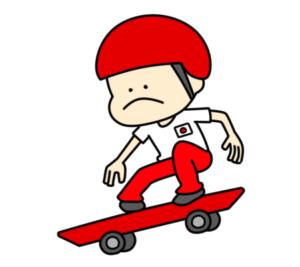